At the farm is practice for Pre Starters Speaking Test Part 1 and 2 of  Cambridge Assessment English Pre A1 Starters (YLE) exam. You will hear the examiner asking you point at objects and put things on a picture of a farm. 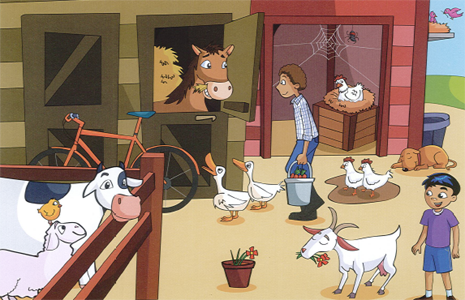 Examiner: Look at the picture. There are some animals. The man is carrying some carrots.

Examiner: Where’s the sheep? Point the first hand at the sheep.

Examiner: Where are the ducks? Point the second hand at the ducks.

Examiner: Now look at the small pictures. Which one is the shell? Put the shell next to the dog.

Examiner: Which one is the bike? Put the bike behind the young boy.

That’s the end of this part. Now go to part two.

Examiner: Look at the bike. What colour is the bike?
Student: Orange

Examiner: How many bikes are there?
Student: One

Examiner: Tell me about the dog.
Student: It’s sleeping.

Here are video of the full test from Cambridge Assessment English.

You see a big picture and you point to things. Then you put three things on the picture and answer questions about it.

At the farm
Girl’s Bedroom

You will see three pictures and you will answer three questions about each picture.

You will answer three questions with a word or short phrase.

About you Set 1
About you Set 2
About you Set 3
In addition, we add reading and writing exercises on a regular basis. Why not bookmark our site, so you can come back to practice anywhere or at any time of the day?
The more words you encounter and understand, the broader your day-to-day vocabulary will become. Our word games and puzzles are an excellent way to help to reinforce spellings in your mind.
Especially helpful are exercises that are focussed on a theme or topic as these provide word retention practice so you can be confident to read, write, speak and listen successfully.

At this beginner level, these exercises provide confidence to speak at this basic level of English.

At this beginner level, there are materials concerned with basic English vocabulary to provide confidence to speak at this basic level of English.

There are materials specifically concerned with a particular grammar structure at this beginner level of English, useful for when it is being introduced for the first time. The main structure at this level is the Present Simple and you will find resources for this as well as others such as frequency adverbs.

There are resources at a beginner level that will give students practice in listening and writing. At this low level, the writing materials are generally short phrases or sentences.

Pre A1 Starters (Beginner) | A1 Movers (Elementary) | A2 Flyers (Pre-Intermediate)