Welcome to our free resource to practise for the IGCSE ESL listening test about the future of shipping. This is just one of many exercises to reinforce your learning so you feel confident when the IGCSE ESL exam day arrives. 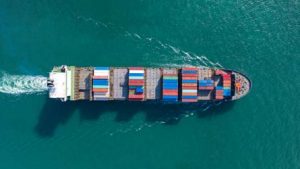 You will hear a business expert giving a talk about the future of shipping. Listen to the talk and complete the sentences.

Thank you for coming along to today’s business talk. The topic is slightly different today and will be useful to anyone interested in overseas trade and shipping. I’m going to tell you about the possibility of remote-controlled ships – that’s ships with no crew or captain on board, but controlled from somewhere else. Your first thought might be that this doesn’t sound possible, let alone sensible. But drones – those are planes with no crew – already exist, and driverless cars too, so there’s no reason why ships can’t be next.

Let’s consider some of the reasons in favour of developing this technology. Firstly, of course, the lack of crew would reduce costs quite significantly, be much safer, and also be more environmentally friendly. You might think that these ships would be more dangerous, but in fact, the majority of accidents that occur at sea are due to human error, rather than extreme weather or poor maintenance. And there’s plenty of research available to support this statement. Another point to consider is the role of a ship’s captain. In the past, the captain would’ve spent long days controlling the ship, steering it in the right direction. However, technology has progressed so fast that most systems on board are computer-controlled – which means that staff management is the
captain’s biggest responsibility. So the reality is that you have highly trained people who only actually operate their ship for a very small amount of time why not have them operating ships all the time?

I can hear you asking yourselves how this would work. Well, the idea is that a ship’s captain would no longer work on the ship itself, but would be relocated to an office in a city. There, they’d be able to control not just one, but a whole fleet of ships, using a computer and several large screens. There would be lots of cameras located all around each ship, which would actually give the captain better views than he’d get if he was working on board.

Some people have expressed concern over this technology – saying that the ships could be dangerous for other smaller boats or even people working in ports. However, we need to consider that it’s the crew who are usually in danger if there’s a problem on board – so removing them is a
logical step. And if a ship does get into difficulties, it will simply be shut down by the captain and will float where it is until the problem is resolved or someone turns up to fix it. In a moment, we’ll look at some pictures which show what these ships might look like. But first, are there any questions?