Welcome to our free resource to practise for the IGCSE ESL listening test about Seashells Part A. This is just one of many exercises to reinforce your learning so you feel confident when the IGCSE ESL exam day arrives. 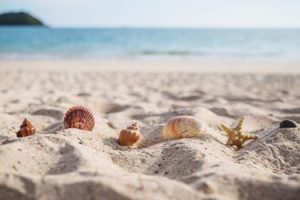 You will hear a man giving a talk about a book he has reviewed. Listen to the talk and complete the sentences in Part A. Type one or two words only in each gap.

Seashells and their secrets is one of those books in which the author takes a single subject, in this case shells, and finds doors to open in many directions. It is beautifully written, and contains many stories about the author and her experiences. The main focus is the biology and ecology of molluscs, creatures which have external shells. This is linked from start to finish with human evolution across the centuries, and I shall give you a few examples from different points in the book.

It begins with Triton, an ancient Greek god who, according to legend, was half man, half fish – he was the messenger of the sea. He carried a weapon which resembled a large fork, and his special feature was a shell, shaped like a tube, which he blew into, like a trumpet, to make the waves in the sea bigger or smaller. When he blew into it strongly, legend says that even giants ran away, as they imagined the sound to be the roar of a wild animal.
The author also ventures into philosophy at one point, describing the darkness inside shells as if it is a hiding place for creatures to back into. You could even imagine a world within a shell if you hold one to your ear and hear the sound of wind and waves inside it. This all seemed to suggest the isolation of people to one French philosopher who was interested in the meaning of shapes and spaces.

Another direction taken by the author is exploring how shells have been used in the past for business purposes. By the 14th century, a type of shell from the Maldives called the cowrie shell had become the main currency over a wide area. The shell had previously been traded in West Africa as a decoration – a form of jewellery. In the 18th century, it is estimated that ten billion shells were taken from the Maldives and used in trading.

The final example I will give today is a contemporary one. The author points out how shellfish populations, like those of many other creatures, are declining in number. If some species disappear altogether, knowledge will be lost – some of which we may only just be starting to discover. Scientists have identified a number of threats including pollution, and fishermen damaging the sea bed. One species that is specifically exciting medical researchers is the geographic cone snail, which has one of the world’s most complex poisons. The sting is usually fatal to humans, yet particular chemicals in it have been extracted and used successfully to treat people suffering from severe pain

Here are keywords and phrases covered in seashells: