Welcome to our free resource to practise for the IGCSE ESL listening test about taking photos of animals. This is just one of many exercises to reinforce your learning so you feel confident when the IGCSE ESL exam day arrives. 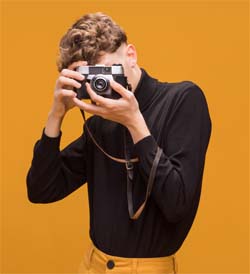 Listen to a conversation between two photography students about taking photos of animals and complete the sentences in Part B.

F: I loved that talk about photographing endangered animals, didn’t you?

M: Yeah, those images were stunning.

F: I know – and now we’ve got to take a wildlife photo for our end-of-term project. We’ll never do anything as good as Joel Sartore’s pictures!

M: Well, even he had to start somewhere. I’ve found a website which should help us, actually. It gives great advice.

M: Well, obviously, you can’t ask an animal to pose in a certain position while you line up your shot. Patience is what it’s all about for wildlife photographers. If you aren’t prepared to wait, you won’t even get a half-decent shot, never mind a great one – even with all the skill in the world.

F: That’s my weekends sorted out, then! I guess it gives you the chance to observe the character of the animal while you’re sitting there.

M: Exactly! You might be familiar with its behaviour already if it’s an animal you’re used to seeing in your garden – but you get to see how individual it is and start to anticipate its next move, and then … you’ve got your photo!
F: You make it sound easy.

M: I’m sure it’s much more difficult than that! Animals tend to run away when they see me coming! Imagine trying to get a photo of a bird – they just fly away as soon as you approach them.

F: Mm … they’re so shy around humans, unlike bigger animals like dogs – they’re much more confident. But then they’re pretty fast when they’re running around – the solution’s to get them to sit first. Much easier.

M: Oh … err … It mentioned how to avoid movement, especially when you’ve got a bigger camera, which is harder to hold still.

F: Like what – using a tree trunk for support, that kind of thing?

M: Not that specifically, but I’m sure you could. The professional photographer who wrote the article suggested using folded clothing.

F: Oh, like your jacket or something? That’s if you’re lying on the ground I suppose.

M: They didn’t say what, exactly … Anyway, there was one more thing that I think might be useful advice.

M: Mm, giving viewers a sense of where an animal lives – so not just doing close-ups of its physical features.

F: Oh … widen the shot out, show its natural habitat, that kind of thing?

F: Mm … interesting! Well, I guess we’d better get on with it then!